Bill Richmond on Black and British: a forgotten history

Click here to buy my book Richmond Unchained, the ONLY full length biography of Bill Richmond ever written 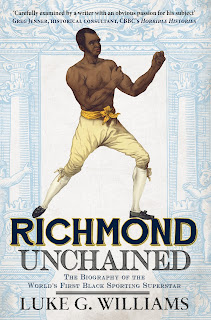 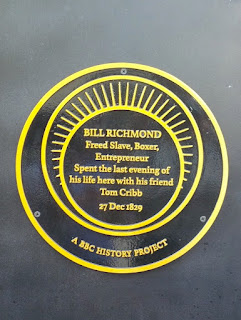 On Wednesday 16 November, the great boxer Bill Richmond (1763-1829) featured in episode 2 of the BBC2 documentary programme Black and British: A Forgotten History, presented and written by historian David Olusoga.

My biography of Bill, Richmond Unchained, which was published in 2015, remains the only full length biography ever written of this vitally important figure from sporting and social history. To see Bill's life 'recognised' in a major television series is, for me, the fulfilment of a longstanding dream.

At the heart of this series is a wonderful project, by which plaques commemorating important figures from black history were erected at locations across the country.

Bill's plaque (pictured above) was unveiled at the Tom Cribb pub in London (it will be permanently installed once the pub undergoes a refurbishment in the new year). Below are a selection of images from the plaque ceremony which took place on Tuesday 13 September, as well as an edited version of the speech I gave at the unveiling.

So read on if you want to discover more about Bill Richmond! If you are then inspired to find out even more about Bill please explore this blog - which contains a wealth of Richmond-related material - or consider buying a copy of my book.
Luke G. Williams, Wednesday 15 November 2016
Email: lgw007@yahoo.com


The life and career of pioneering pugilist Bill Richmond has been honoured by the unveiling of a BBC History plaque at the Tom Cribb pub in London. Luke G. Williams puts Richmond's life in context, explaining the significance of his career and the plaque's location.

Most people have never heard of Bill Richmond, yet before Muhammad Ali, before Jesse Owens and before Jack Johnson,  Richmond was the first sports star of African heritage.

Bill was born a slave in Staten Island, America in 1763. As a teenager he won his freedom thanks to the intervention of an English soldier named Hugh Percy who brought the youngster to England.

Once in England, Percy acted as Richmond’s mentor. He ensured Bill was educated and then apprenticed to a cabinetmaker in York. Bill married a local white woman named Mary, had several children and lived a respectable life as a trained craftsman and family man.

This was an unusual but far from unique existence for a black man in Georgian England.

However, when Richmond was in his 40s something changed ... and instead of continuing with a life of quiet respectability, he decided to enter the world of professional boxing.

Now you must expel all thoughts from your mind of modern boxing when contemplating what the sport was like in Bill Richmond’s day.

For starters, all boxing matches were conducted with bare knuckles. And secondly there were no points decisions or judges. Fights continued until one of the combatants could no longer stand or continue, and sometimes lasted hour upon hour.

In short, bareknuckle boxing was a brutal and unforgiving sport.

Why then might a family man such as Bill Richmond risk injury or even death to enter the prize ring?

The answer, I believe, was what Indiana Jones once called 'fortune and glory'.

In the early 1800s boxing was the biggest and most popular sport in England, and the leading boxers the nation’s most feted and favoured sons.

The ground on which the Tom Cribb pub stands, just off Leicester Square, was the centre of the boxing universe in Georgian England. The early 19th century equivalent of Las Vegas, if you will. A couple of hundred yards to the south, down St Martin’s Street, was the Fives Court, the country’s leading boxing arena, where fighters publicly sparred in front of packed houses and the deal-makers arranged fights. Lords, nobles, MPs, fighters and the working man would all mingle here - united by their shared love of boxing.

Before Richmond entered the prize ring, no other black boxer had succeeded in overcoming the prejudice of the crowd and the public to carve out a successful sporting career, but Richmond was a man with an eye for the theatrical and possessed the steely determination needed to secure social advancement. Through the sheer force of his personality, his charisma and physical excellence he thus became the first black sportsman to achieve national fame and significance.

And he did so without ever succumbing to popular stereotypes – in short, he was a fighter but he was no thug, indeed he viewed boxing as an art, once declaring: “A gentleman, sir, only uses his hands to defend himself, and not to attack; we call the pugilistic art, for that reason, the noble science of defence.”

Despite his advanced age when he first fought in the London prize ring in 1804, Richmond enjoyed a remarkable boxing career. Indeed, he was still fighting and winning significant fights in his mid-50s, and in total he won 17 contests, losing just twice.

In the process of his career, this former black slave became one of the most famous celebrities in England and was also viewed as one of the most skilled boxing trainers in the land. The likes of Lord Byron and William Hazlitt were among those who sought boxing tuition at Richmond’s training rooms.

Unfortunately, Richmond was never quite physically large enough or young enough to win the Boxing Championship of England, but he did play a significant role in two boxing matches between Englishman Tom Cribb and another former slave Tom Molineaux for the English Championship in 1810 and 1811.

For these fights the formidable Molineaux was mentored, nurtured and trained by Richmond.
Richmond had lost to Cribb several years earlier and thought he had found, in Molineaux, a fellow black man young and strong enough to win the English Boxing Championship. The prospect of this ‘black challenge’ to presumed white English supremacy caused a sensation in Georgian England and the two Cribb-Molineaux contests, which Richmond co-promoted, were the biggest and most significant sporting occasions of their day. One writer even commented that the outcome of these fights was more important to England’s future than what happened in the country’s ongoing war with Napoleon.

After his association with Molineaux, Richmond remained a highly respected elder statesman of boxing. He was among the group of pugilists invited to the coronation of George IV in 1821 to act as an usher - a remarkable honour for a man who began life in the colonies as a slave.

In the years before his eventual death in 1829, Richmond and his former arch rival Tom Cribb buried their rivalry and became great friends. Every Sunday the two men would dine together at the Union Arms pub, of which Cribb was the landlord, and it was here, on 27 December 1829, that Richmond spent the last evening of his life, before dying aged 69.

Richmond’s death was marked by the appearance in dozens of newspapers of admiring obituaries and articles about him.

Given that he spent the last night of his life on the premises of what is now the Tom Cribb pub, it is highly appropriate that London’s leading pugilistic public house is now the permanent residence for a splendid memorial to Richmond’s remarkable life, a memorial which has been made possible by David Olusoga's new BBC series A Black History of Britain, which will air on BBC2 this November.

Nearly 200 years since his death, Richmond is, at last, gaining the widespread recognition his remarkable life and career have long deserved.

The above text is an edited version of a speech given by Luke G. Williams at the unveiling event on Tuesday 13 September 2016. For more information on Bill Richmond, check out Luke's book, Richmond Unchained.