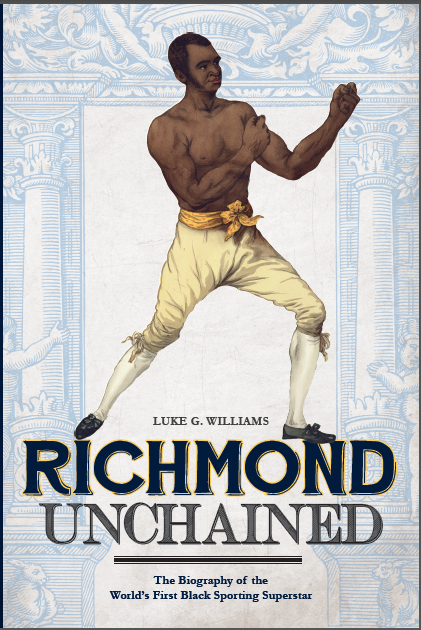 
"In Richmond Unchained, Luke Williams has unearthed a fascinating story of a man who was born a slave yet rose to fight in front of nobles and princes in nineteenth century London. This book describes the early days of professional pugilism and how it marked the beginning of the general public watching sport as a spectacle on their days off. His description of thousands of carriages and spectators fighting their way through muddy lanes to get to fights held on remote moors and commons, away from law enforcement agencies, feels as real as if we were able to watch television pictures of these early fights."
Annie Vernon, Olympic Silver Medalist, member of judging panel for the Cross Sports Book of the Year awards, Biography of the Year

"Mr. Williams proves both diligent and tenacious in researching the details of Richmond's life ... as well as judicious in his assessment of the most likely course of events in the many instances in which there is conflicting evidence ... The merits, then, of Mr. Williams' book are many and manifold (including the splendid illustrations by Trevor Von Eeden), and it can be heartily recommended to pugilist-specialist readers and novices alike. ... This is definitely a book with "bottom"."
John Exshaw, Boxing Monthly Magazine


"Telling the story of Bill Richmond’s life is like trying to complete a jigsaw puzzle with some of the pieces missing. Richmond rose to prominence as a prizefighter in England and was the first black sportsman to achieve national fame. Richmond Unchained by Luke G. Williams is a worthy effort that does him justice. ... Richmond Unchained brings a long-ago time and the people in it to life. Williams recreates London well and succeeds in describing the role of prizefighting in England at the start of the nineteenth century. The two Cribb-Molineaux fights are the dramatic high points of the narrative. But the portrait of Richmond that Williams crafts outshines them. It’s a difficult task to accurately portray a man who’s enshrouded in myth and lived two centuries ago and then place that man in the historical context of his times. That Williams succeeds is a tribute to his pain-staking research." Click here for full review
Thomas Hauser, award-winning author of Muhammad Ali: His Life and Times

"I have just finished the new book Richmond Unchained, by Luke G. Williams - and it is wonderful. I like books which have a sense of "importance" to them - I like to feel that I am reading about something that truly matters - and that certainly applies in the case of Richmond Unchained. This book should be made into a movie ... The book is subtitled "The Biography of the World's First Black Sporting Superstar", and it tells the story of Bill Richmond, an American slave, who rose to great prominence as a boxer in Georgian England ... The tremendous sense of importance which I feel about this book truly came home in the section dealing with the famous Molineaux-Cribb fight when Tom Molineaux, a black American, was matched against Tom Cribb, the English Champion. Bill Richmond was ringside, as Molineaux's trainer/manager. The fight has a good claim to be considered the first international sporting event of significance, long before there were international matches in football, rugby and cricket. That in itself would make the fight important - but added to that, there is the whole matter of race in England, which runs alongside this fight, and is a recurring issue in the book as a whole ...I love the book's illustrations, drawn by Trevor Von Eeden, which have the feel of a superhero comic book ... Luke is an excellent writer and researcher, and I strongly recommend this book." Click here for full review
Stephen Jarvis, author, Death and Mr Pickwick

"If you don't know about Bill Richmond then you should educate yourself ... What a life ... A very interesting book ... Can't put it down ..."
Martin Offiah MBE

"This modern biography of Bill Richmond, Britain's first black boxing superstar, is in my opinion quite simply the most well written, thoroughly researched and historically accurate work of its kind ever produced. Not only does the author touch upon and explore many of the known and lesser known mysteries and themes of Richmond’s life, he also manages to successfully explain the often complicated background history of his times, and does so in a highly readable and fascinating way. If you are interested in sport, or in British social history, or in reading about an icon and trailblazer for black athletes of today, then this book should be top of your current reading list. I think this book is also going to be an inspiration for many people for a long time into the future, and all credit to the author for bringing this boxing legend out of his current state of relative obscurity and putting him back in his rightful place as the founding father of black boxing, not just in Britain, but also the world."
Alex Joanides, boxing historian, Romevillemedia.co.uk, editor Memoirs of the Life of Daniel Mendoza (2011 edition)

"I thought this was a very well written book about an important figure in boxing history. I really knew very little about Bill Richmond before reading this story but the author's extensive research has helped me rectify that matter. I found it particularly interesting that Richmond fought into his 50’s and to learn how difficult it was for him to become a respected member of English society. I highly recommend this book to anyone who has an interest in learning more about this time in English boxing history and the trials and tribulations that a black man faced during that period of time."
Clay Moyle, author and boxing historian


"I stayed up late three nights in a row while I was reading this book. It is, first and foremost, a fascinating, larger than life story. Williams skillfully paces his telling of Richmond's transition from American born slave to a revered elder statesman of English boxing. Histories of American and Britain too often omit all mention of people of color, or else stop and start the discussion around slavery and ethnicity. This biography gives us the story of a life that explodes cliche and shows us a living, breathing man. I read the biography because I was familiar with his name and knew that he had boxed in England during the early 19th century and wanted to know more. I came away inspired and informed and utterly impressed with Richmond's accomplishments and achievements. This isn't the story a boxer who happened to be Black. It's the story of one of the central figures of English boxing. Who, by the way, was a Black man. The author's meticulous research shows and the result is a level of detail that exceeds anything previously written about Richmond or, indeed, this era of boxing. Williams deals bluntly with issues of slavery and racism, but within in context of Richmond's life. it's painfully clear that in 200 years, not enough has changed. I loved this book. I appreciated the attention to detail, and I came away inspired."
Carolyn Jewel, USA Today bestselling author

"Richmond Unchained is an accomplished and absorbing study of life and sport in Georgian Britain ... A fascinating, and deeply researched, account of one man’s trials and triumphs as he breaches the prizefighting citadel that was Georgian London ... A compelling blend of sporting and socio-cultural history, chronicling Richmond’s remarkable journey and eventual recognition as one of prizefighting’s foremost ambassadors ... An enthralling odyssey, recounting Richmond’s stellar achievements fought for against the intriguing backdrop of the Georgian prizefighting world ... An engrossing biography, and cultural evaluation, that accurately captures the essence of the conflicting qualities of Georgian London’s prizefighting scene."
David Snowdon, author Writing the Prizefight, Winner 2014 Lord Aberdare Prize

"Over many years of dogged research, Luke Williams has assembled a wonderful array of new sources to flesh out the fascinating life of a man famed in his own era, but who is only recently being rediscovered by historians. Williams challenges the fanciful Wikipedia myths, and instead reveals the truth to be far more compelling. Richmond was a complex man living in complex times, and has long deserved a biography. It's heartening, then, that the life of Britain's first Black sports star is carefully examined by a writer with an obvious passion for his subject."
Greg Jenner, historical consultant CBBC's Horrible Histories, author A Million Years in a Day: A Curious History of Everyday Life