The Richmond sites: The Horse and Dolphin 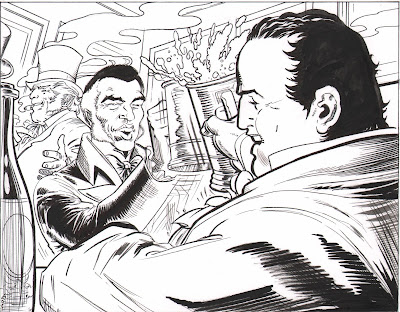 In the first of an occasional series, Luke G. Williams looks at some of the sites associated with Bill Richmond's life that pugilistic fans might like to visit. The series begins with a look at some of the confusion surrounding the location of Richmond's former public house The Horse and Dolphin ...

Bill Richmond fanatics will be aware that the great pugilist of the 19th century was once landlord of a pub known as the Horse and Dolphin, just off Leicester Square. Contrary to the myth that marrying a wealthy woman enabled Richmond to assume proprietorship of a pub once jokingly referred to by famed boxing writer Pierce Egan as 'The Prad and Swimmer', it is likely that Richmond's winnings from his victories against Isaac Wood and George Maddox in 1809 provided the economic ballast for his new-found status as a landlord. Land tax records suggest he assumed proprietorship of the pub in 1810.

For a couple of years, Richmond led a lucrative and happy existence at the Horse and Dolphin. The journal Bell's Life in London vividly described this period, which coincided with Richmond mentoring fellow former slave Tom Molineaux to the brink of the English Boxing Championship, and the Horse and Dolphin becoming known as "the headquarters of the black work": 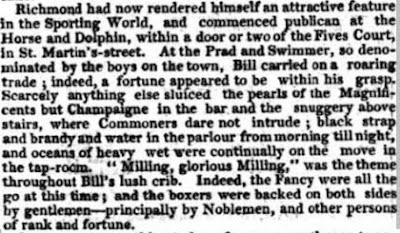 As Bell's Life also mentioned, Richmond was forced to leave the Horse and Dolphin after he fell on hard economic times when Molineaux lost his rematch against Cribb for the English Boxing Championship, a contest for which Richmond was his principal backer as well as his trainer. Land tax records suggest he left the pub sometime in 1812. 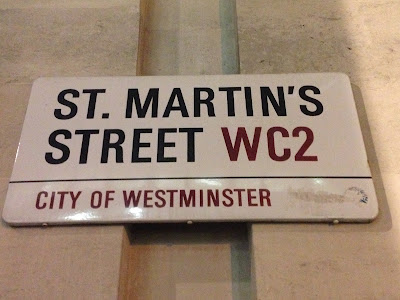 For years there has been confusion about where exactly the Horse and Dolphin was located, despite clear historical references to its location at 25 St Martin's Street (a road that snakes southwards from Leicester Square) - references, incidentally, which are backed up by land tax records and other documentation.

Horwood's map of London from the 1790s, coupled with research from the City of Westminster Archives Centre, indicates that 25 St Martin's Street was located at the southernmost corner of the street, where the road begins to swing around and meet with Whitcomb Street.

Confusion seems to have arisen because, during Richmond's lifetime, his pub was not the only 'Horse and Dolphin' to grace the streets of London - there was also a pub with the same name based in Macclesfield Street in Soho, on the site now occupied by the well-known 'Dutch pub' De Hems. This is the reason why the Wikipedia page for De Hems, as well as several other websites, erroneously claims that De Hems was "once owned by bare-knuckle boxer Bill 'The Black Terror' Richmond in the early 19th century". It's an understandable mistake to make, particularly given the existence of a small alleyway named Horse and Dolphin yard to the right of De Hems, and the proximity of the site to Leicester Square, where some sources have lazily stated Richmond's pub was located.

Sadly, unlike De Hems, the site once occupied by Richmond's Horse and Dolphin in St Martin's Street is no more. In the 1820s many of the streets near to Leicester Square were gradually redeveloped to make way for the construction of Trafalgar Square. The Fives Court in St Martin's Lane, which for years had been London's leading pugilistic exhibition venue, was one such building to be demolished.

By this stage, Richmond himself had long since ceased being landlord of the Horse and Dolphin. Nevertheless, the pub itself stubbornly survived this period of urban development; a map from 1871 clearly shows its location at the southern end of St Martin's Street (marked by the initials P.H. - public house), as well as the nearby existence of the new National Gallery building, designed by William Wilkins which had begun construction in 1832 as part of the extended Trafalgar Square project.

Furthermore, records held by the London Metropolitan Archives prove that the Horse and Dolphin was still in existence and trading under this name until at least October 1950. However, I have been unable to establish exactly when it ceased trading, or when the building itself was demolished. (If anyone has any information about the Horse and Dolphin post-1950, I'd love to hear from you. I'd also love to find an illustration or photo of the pub, having never succeeded in finding one. Email me at lgw007@yahoo.com if you can help!)

The most likely explanation of the Horse and Dolphin's demise is that it occurred during the 1980s when the Sainsbury Wing was added to the National Gallery. Certainly this seems the most likely date when the building was demolished, although the pub may have ceased trading earlier.

Today, if you want to stand where Bill Richmond's pub once was, all there is to mark his former home and business is a bland concrete wall to the rear of the National Gallery. It's hardly a fitting memorial to the world's first black sporting superstar ... which leads me neatly on to the subject of Shepherd Neame's Tom Cribb pub in Panton Street, for reasons which I'll reveal more about in due course ...
Posted by Luke G. Williams at 10:48