A visit to Alnwick 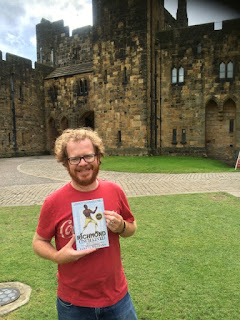 It was a beautiful week in August when I visited Alnwick Castle, ancestral home of the Percy family, to give a talk about my book Richmond Unchained.

Bill Richmond, of course, has a strong link to Alnwick and the Percy family - it was Hugh Percy, later the second Duke of Northumberland, who freed Bill from slavery and brought him to England as a teenager. A true humanitarian, Percy also had Bill educated and apprenticed into the cabinet-making trade.

It has  been a longstanding ambition of mine to visit Alnwick Castle and the invitation to do so while also delivering a talk about my book was therefore an offer I couldn't refuse! 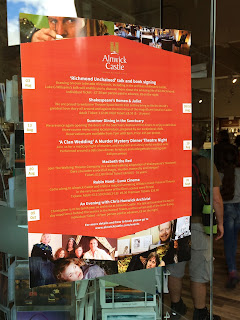 The talk took place on the evening of Wednesday 3 August in the restaurant area of the castle. There were around 20 or so people in attendance, including some who had travelled from Gateshead and Newcastle due to their interest in Bill Richmond, which was very flattering.

My talk focused on the links between Richmond and the Percy family, including references to the material in the Alnwick archives which refers to Bill Richmond.

The audience were attentive throughout and in the Q and A session afterwards asked several interesting questions. I was also delighted to learn from one member of the audience about the fascinating connection and friendship between Percy and the native American Iroquois leader Thayandanegea (also known as Joseph Brant).

Many members of the audience bought copies of Richmond Unchained after the talk and, although he could not attend the event, the current and 12th Duke of Northumberland Ralph Percy, even bought a copy which will be bound and placed in the family library at Alnwick.

My two days in Alnwick were made complete when the team at the castle arranged for myself, my wife and daughter to visit the breathtaking castle, grounds and gardens the day after my talk. All in all, it was a wonderful couple of days and I must thank all the staff at Alnwick, particularly visitor activity manager James Boyd, for making my visit such a memorable one.

Testimonial about my talk:
"Luke's lecture on Bill Richmond complimented a very well written and incredibly detailed book. The depth of the research carried out by Luke is so great that he was able to tailor the talk and focus on the early stages of Bill Richmond's remarkable life, and the engagements with Hugh Percy, the 2nd Duke of Northumberland. Not only did the talk follow the journey of Richmond, but also Luke's personal journey of research. How Luke has managed to find such fascinating information about a gentleman that existed over 200 years ago is a triumph, and I’m sure will be enjoyed by many that read the book or hear Luke talk." James Boyd, visitor activity manager, Alnwick Castle 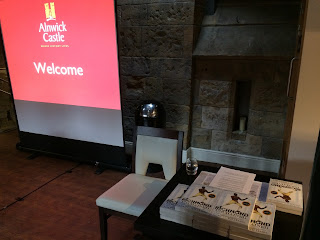