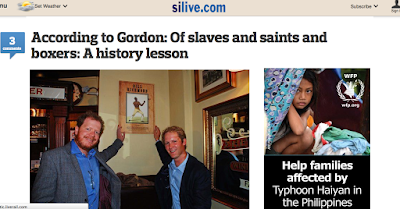 It has long been a source of irritation to myself - and many other Bill Richmond admirers - that he has been denied the widespread recognition his incredible life and achievements warrant.

Although Richmond has been inducted into the International Boxing Hall of Fame, this did not happen, according to the IBHOF's own website, until either 1999 or 2005 (dates on the IBHOF's site contradict each other). By contrast, Richmond's contemporaries Tom Cribb and Tom Molineaux were inducted in 1991 and 1997 respectively.

Similarly, there had been no 'official' public recognition of Richmond's life in the UK until last month when, at the launch event for Richmond Unchained, a memorial to him was unveiled at the Tom Cribb pub in central London.

Finally, though, this might be about to change, thanks to the efforts of Staten Islander Nick Dowen, who brought Bill to the attention of the Staten Island Advance newspaper, whose writer Cormac Gordon has written a splendid story about Richmond, which also gives Richmond Unchained some nice mentions. Click here to read Cormac Gordon's full story. And here's hoping that the Staten Island Sports Hall of Fame take notice!
Posted by Luke G. Williams at 10:01