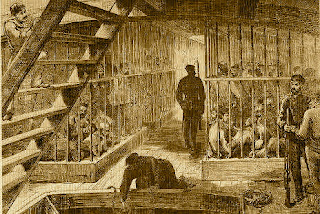 SPOILER ALERT: If you haven't read Richmond Unchained, this article gives away some of the details of the Richmond family as outlined in the book and my continuing research ...

Yesterday I examined new evidence relating to my research into Bill Richmond's family. These findings revealed details about Bill's daughter Hannah, her likely marriage and a baptism record for her possible daughter named Rose. If these connections can be firmed up, then Rose could become the first confirmed grandchild of Bill Richmond to emerge from my 12-year study into his life, times and family.

Today I present another possible candidate to be a grandchild of Bill's - namely one Mary Ann Richmond, who features in two articles from the Leicester Chronicle newspaper which I have recently discovered.


Aside from her surname, Mary Ann caught my attention for two reasons. Firstly, her Christian name is the same as Bill's wife, suggesting she may have been named after her grandmother. Secondly, both articles I found about her make mention of her ethnicity, with one referring to her as a "mulatto" and the other describing her as a "woman of colour".

The timescale of the articles - which appeared in 1838 and 1843 - fit with the general chronology of Bill's family as we know it. In the second article Mary Ann is described as being 19 years old, which means she would have been born around 1824. If she was indeed related to Bill then that would make her a possible daughter of Bill's son William, baptised in 1797, or Henry, who was baptised in 1813 (but could have been born a few years earlier).

Although Bill and his family seem to have been based in London from the mid-1790s until his death in 1829, the apparent Leicester residence of Mary Ann Richmond does not preclude her from being a family member. Bill's son Henry, for example, ended up in the Midlands at some point, with an 1841 newspaper report I have found - the latest reference I have to Henry's life - suggesting that he was living in the environs of Birmingham, which is only 40 miles, incidentally, from Leicester.


The first article I found about Mary Ann Richmond dates from 14 October 1837. The article describes how Mary Ann, along with one Maaia Fowkes, got into trouble with the law for attempting to spend a fake half-sovereign coin, an offence for which the pair were remanded in custody, but presumably later freed.

Sadly, this was not Mary Ann Richmond's only brush with the law. Six years later a heart-rending article in the Leicester Chronicle described a particularly sad development in her life. Charged alongside a 23-year-old named Eliza Savage with receiving a shawl stolen by one William Vesty and "knowing [it] to be stolen", Mary Ann faced the full wrath of the crown court on 17 October 1843.

This report identifies Mary Ann as being just 19 years of age and a "woman of colour", also noting that she could neither "read nor write". Presumably due to poverty, it is also claimed that Mary Ann "had no lawyer to speak for her" in court. She was therefore forced to defend herself, which she did "with much vehemence",  at one stage accusing one of the prosecution witnesses of being a "lying villain".

Despite Mary Ann's protestations, and an admission on the part of the journalist present at the proceedings that the "evidence against Richmond" was "not so strong as against Savage", she was found guilty and sentenced to ten years' transportation.

Unsurprisingly, given how strongly she had protested her innocence, Mary Ann greeted the news of her punishment with dismay and distress, as did her co-accused Savage, who had been sentenced to transportation for life.

"The severity of the sentence almost rendered the women frantic," reads the report. "The woman Richmond exclaimed: "I did not know! I did not know! Oh, Vesty, what have you done for me?" ... it was with great difficulty either of them could be removed from the bar."

Regardless of whether she was related to Bill Richmond or not, the vivid and disturbing glimpses we gain of Mary Ann Richmond's life from these two articles speak eloquently of the harsh attitudes towards theft and the unforgiving judicial attitudes faced by many people living in poverty.

Once Mary Ann was transported, most likely to Australia, who knows what her fate was, although the following passage, from the documentary A Short History of Convict Australia, paints a bleak picture of existence for female convicts at this time:


"Women made up 15% of the convict population. They are reported to have been low-class women, foul mouthed and with loose morals. Nevertheless they were told to dress in clothes from London and lined up for inspection so that the officers could take their pick of the prettiest ... Until they were assigned work, women were taken to the Female Factories, where they performed menial tasks like making clothes or toiling over wash-tubs. It was also the place where women were sent as a punishment for misbehaving, if they were pregnant or had illegitimate children ... Other punishments for women included an iron collar fastened round the neck, or having her head shaved as a mark of disgrace. Often these punishments were for moral misdemeanours, such as being ‘found in the yard of an inn in an indecent posture for an immoral purpose‘, or ‘misconduct in being in a brothel with her mistress’ child‘ ... As women were a scarcity in the colony, if they married they could be assigned to free settlers. Often, desperate men would go looking for a wife at the Female Factories."

I will endeavour to find out more about Mary Ann, and her possible link to Bill Richmond, if I possibly can. 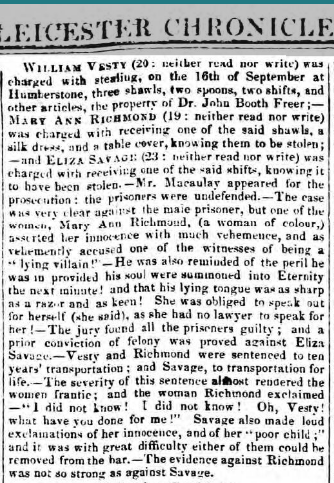 If you have any information about Bill Richmond's ancestors or family, no matter how small or anecdotal, please email me at lgw007@yahoo.com
With thanks to researcher Kristina Bedford, whose website can be reached here.
Posted by Luke G. Williams at 11:11