Best ever veterans: No. 5 George Maddox 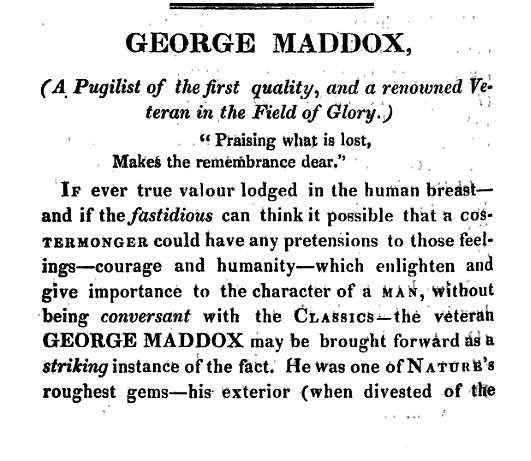 With apologies to the likes of Bob Fitzsimmons, Jersey Joe Walcott and many other admirable vets who didn't quite make the cut, I'll be counting down my top five over the next few days, beginning today with number 5. (Don't worry, by the way, Mickey Rourke does not appear on the list...)


5. George Maddox:
A bit of a left-field choice this one ... Maddox was one of the unsung heroes of the Georgian bare knuckle era. Although he never acceded to the championship, in the estimation of the great boxing writer Pierce Egan he was one the finest pugilists never to win the title. Meanwhile, no less a man of letters than Sir Arthur Conan Doyle said of Maddox in his novel Rodney Stone that he was "as good a man as ever pulled his coat off".

Truth be told, Maddox was more renowned for his epic defeats than his victories; he shared a titanic two-hour-ten-minute tussle with the legendary Tom Cribb in 1805 (when he was "in his fiftieth year"), and manfully took a fearsome beating from Bill Richmond in 1809 when in his mid-50s. Five years earlier, Maddox had defeated an inexperienced Richmond in nine rounds, one of two contests he won in a single afternoon!

Fighting was obviously in the Maddox family genes, for Egan recounts that George's sister Grace seconded him in a contest in 1776, at the conclusion of which she offered to fight any man present at the bout!

In all, Maddox's career lasted around 35 years, and to still be competing at the highest level in his 50s was a quite astonishing feat. Sadly, Maddox died not long after a benefit in his honour at the Fives Court in London. He fell heavily near to Borough Market and broke his thigh, which brought on a fever.

In Egan's words the illiterate but good-natured Maddox "lived respected and died pitied".

Thoughts on the best boxing veterans ever? Email lgw007@yahoo.com