Best ever veterans: No. 4 Archie Moore 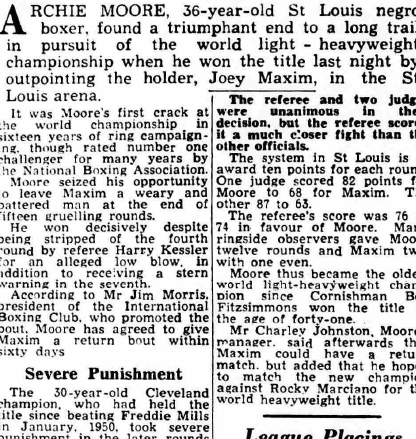 With apologies to the likes of Bob Fitzsimmons, Jersey Joe Walcott and many other admirable vets who didn't quite make the cut, I've been counting down my top five. Earlier this week I explained why George Maddox was my number 5 choice and today I present my no. 4...

4. Archie Moore:
'Old Archie Moore', as the then Cassius Clay famously labelled him, was a phenomenon. During a 25-year long professional career he fought in every decade from the 30s to the 60s. To put his longevity into historical perspective, Moore was born during World War I and didn't retire from the ring until John F. Kenndey was President.

Moore's first contest took place in 1938 and for years he was one of the most avoided light-heavyweights around - indeed he didn't get a world title shot until he was 36, whereupon he soundly beat Joey Maxim to be recognised as world champ.

By the time his career came to an end in 1963, Moore had assembled an incredible record of 185 wins, 23 loses and 10 draws, as well as a jaw-dropping 131 victories by KO. Known for his famous 'cross-armed' guard and sledgehammer punch, Moore not only dominated at light-heavy, but also fought many of the best heavyweights of the post-war era, including Rocky Marciano and Cassius Clay.

Of his incredible longevity, and seeming addiction to the price ring, Moore once quipped: "I'm like the drunk in the bar who wants just one more for the road."

Post-boxing, Moore took up acting and was awarded numerous accolades - most sound judges rank him as either the greatest light-heavy of them all or right up there in the top five.