In the third of an occasional series, Luke G. Williams looks at some of the sites associated with Bill Richmond's life that pugilistic fans might like to visit. The series continues with a look at the locations in and around Sussex connected with the controversial contest in December 1810 between Richmond's protege Tom Molineaux and Tom Cribb for the Championship of England ...

NB: Thanks to Alex Joanides for invaluable advice and assistance with this article. Check out his website here

The Tom Cribb-Tom Molineaux prize fight that took place on 18 December 1810 at Copthorne Common in Sussex remains one of the most controversial and significant contests in sporting history. For this reason - as well as due to my fascination with the life of Richmond and the history of boxing - I have always wanted to visit the location where this contest took place, and last week this ambition was finally realised.

Before I examine the sites I visited last week that have a connection to the contest, a bit of background for the benefit of those who do not know much about the fight and its significance. In 1810, under the canny guidance and expert management of black pugilist Bill Richmond, Tom Molineaux - a former slave from the United States - electrified England's boxing landscape with a series of impressive victories. By popular demand, these wins earned him a contest with Tom Cribb, the reigning champion of All England.

Although the English sense of 'sporting fair play' recognised that Molineaux was easily the best contender to face Cribb, there was palpable nervousness surrounding the prospect of a black boxer becoming Champion of England. Lest we forget, this was an age when slavery was still in operation across the British Empire, while constant years of war with France meant that the English put great symbolic faith in their pugilistic heroes. Champions such as Cribb, Belcher, Gully et al were living symbols of the English characteristics of pluck and heart that were needed to defeat Napoleon. Therefore, for the English champion to be deposed by a foreigner - and a black one at that - was, to many, an unthinkably awful prospect. Indeed, in the build-up to Cribb-Molineaux one newspaper went as far to argue that a Molineaux victory would bring "eternal dishonour" to England.

In the event, Molineaux did not win, but he came damn close and many - myself included - firmly believe that had it not been for foul play, specifically a ring invasion, he would have been declared the winner. (The fight and its fairness or otherwise are examined in detail in my book Richmond Unchained).

As well as its socio-cultural undertones, the first Cribb-Molineaux contest was also significant in terms of sporting history, as it has a good case to be regarded as the first major international sporting spectacle of all time. True, foreign fighters had contested against English boxers in the past - for example, Bob Whitaker's contest with the Venetian Gondolier in 1733 and Frenchman Petit's bout against Jack Slack in 1754 - but these were relatively low-key contests in comparison to Cribb versus Molineaux, which attracted around 10,000 spectators and also made the pages of foreign, as well as domestic, newspapers. The first international events in football, cricket and rugby and other major sports would not occur until many decades in the future.

You would think that the location of such a historic event would be well signposted and a well-known landmark, but, sadly, that is not the case. Much of the glorious (and not so glorious!) history of boxing is unmarked and seemingly forgotten these days, and sadly the Cribb v Molineaux fight is no exception.

Indeed, even working out the exact location of the fight has proved to be something of a challenge! This is partly because accounts from 1810 are pretty vague concerning where exactly the contest took place. Most reports of the contest utilise the variant spelling of Copthall (as opposed to Copthorne) Common, and pinpoint the fight as having taken place in Sussex, close to the border with Surrey, with several mentioning the common's proximity to the town of East Grinstead. The screen grabs below show what the geography of Copthorne Common was like circa 1805, five years before the fight, as well as the comparative geography today. A study of these maps makes it clear that the majority of the northern area of the common no longer exists.

As we can see from the above maps, the modern-day A264 - also known as Copthorne Common Road - was the dividing line between the counties of Sussex and Surrey in 1810. Incidentally, the contemporary references to the fight taking place in Sussex, as opposed to Surrey are hardly surprising given the relative leniency of magistrates in Sussex towards prize fighting at this time compared to their Surrey counterparts.

Taking the geography and county border into account, it is highly likely that the location of the fight was somewhere along the south-side of what is now Copthorne Common Road.

Thankfully, contemporary sources provide us with a further, possibly decisive clue. One of the most detailed accounts of the Cribb-Molineaux fight states that: "the spot [where the fight took place] was situated nearly at the foot of a hill, which protected the combatants from the chilling wind and rain from the eastward."

Driving along the gradual downwards slope of Copthorne Common Road it is immediately evident which areas of the common fit these descriptions: namely, the area today occupied by Court House Farm and the adjacent area to the farm, which is now part of Copthorne Golf Course. The maps and photos below outline these locations.

Having visited Copthorne Common, I then decided to visit two other sites associated with the fight, namely the locations where the two fighters and their respective 'teams' lodged before the contest - the Dorset Arms pub in East Grinstead - where Richmond and Molineaux stayed - and the Crown in Turner's Hill - where the champion Cribb resided.

The Dorset Arms is 5.3 miles east of the fight's likely location on Copthorne Common. Driving the same route that Molineaux and Richmond would have travelled to the fight in 1810 was a wonderful experience - I even allowed myself the luxury of wondering what conflicting emotions of excitement and nervousness must have been racing through their minds as they approached their date with pugilistic destiny!

Their journey that day - most likely in a barouche and then on foot - would have been far from straightforward given the horrendous weather, as one account of the fight makes clear: "A more unfavourable day for the sport could not possibly have been selected, as it rained in torrents the whole of the day ... the last three miles of the road were almost knee-deep with clay; so that it can excite no surprise to learn that many horses were knocked up, and the riders, as well as pedestrians, never reached the place of action."

As the below images illustrate, although the frontage of the Dorset Arms has been modernised, it is clearly the same building as in the early 1900s, when it was known as the Dorset Arms Hotel. It seems unlikely that the pub would have been rebuilt between 1810 and the 1900s.

Sadly, the temporary residence in 1810 of two historic boxers has not been memorialised in the pub, although there are a selection of interesting historical prints on the walls, as well as a series of fine beers on tap and a good food menu! 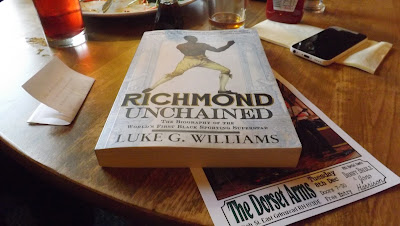 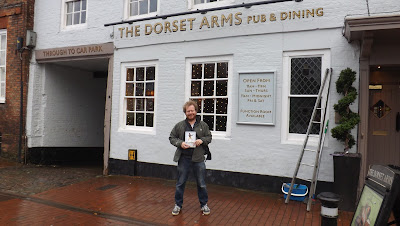 Viewing the Dorset Arms from the rear you get an idea of where the stables probably were in 1810, which possibly housed the horses which dragged Richmond and Molineaux's carriage some of the way to Copthorne Common.

Having visited the Dorset Arms, next on my list was the The Crown Pub, where Cribb stayed before defending his title.

Located in Turner's Hill, Cribb's shorter 3.4 mile journey to Copthorne Common may well mean that he was able to leave later in the morning for the fight than Molineaux was. Could this have been an often overlooked reason why his stamina appeared superior in the latter stages of the fight and he appeared less affected by the terrible weather than Molineaux? Perhaps ...

Like the Dorset Arms, the exterior of the Crown has been modernised, but the original core of the building most likely remains the same as in 1810. Although there are many fox-hunting prints on the wall, there is no recognition of the pub's pugilistic heritage, which is a real shame. 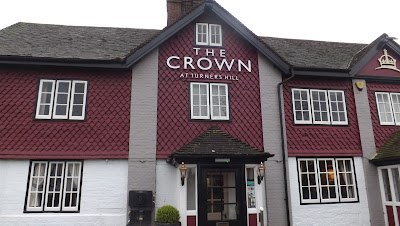 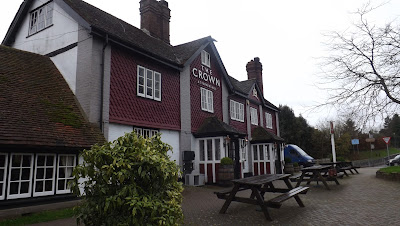 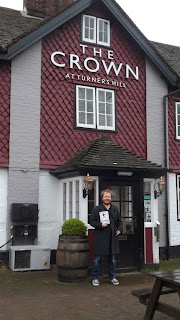 Like the Dorset Arms, the Crown has a great selection of beers and a wonderful menu. The dining area of the pub, with its low beams, gives an indication of what the interior of the pub may have looked like in 1810. I can just picture Cribb and his chief second Joe Ward huddled by the fireside while discussing tactics for the fight! 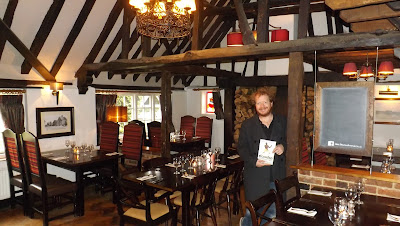 If you are a Cribb, Molineaux or Richmond fan, then a visit to Copthorne followed by visits to these two pubs, makes for a pretty enjoyable itinerary!
Posted by Luke G. Williams at 05:27