The Battle of Waterloo took place 200 years ago this week. As Britain goes Waterloo-mad,  I'll be presenting a series of features in which I look at aspects of the famous battle which intersected with the world of pugilism inhabited by slave turned boxer Bill Richmond, the subject of my forthcoming book Richmond Unchained. Today this series begins with a look at the January 1812 sparring battle between Richmond's protégé Tom Molineaux and Lifeguardsman John Shaw, who would die a heroic death on the Belgian battle-field three years later ...

In January 1812, Bill Richmond was in a bitter mood. Tom Cribb had solidly beaten Richmond's protégé Tom Molineaux a few months earlier in their rematch for the English Boxing Championship, thus destroying Richmond's long-held ambition of overseeing the accession of a black boxer to the position of champion. To add insult to injury, it was a fight in which Richmond had invested pretty much every penny he possessed. Molineaux's defeat had therefore left him in desperate financial straits, and in danger of losing his status as landlord of the popular public house the Horse and Dolphin.

No sooner had the fight at Thistleton Gap concluded than the disputes which had raged between Richmond and Molineaux during the contest's build-up - which had mainly centred around Molineaux's lack of focused and dedicated training - flared up again.

By January 1812, the former friends had gone their separate ways and Molineaux was no longer a resident of the Horse and Dolphin. Richmond retreated to the north of England for a while to lick his proverbial wounds and try and ease his financial problems by giving a series of sparring exhibitions in a Manchester theatre with his old friend Tom Belcher. Molineaux, meanwhile, basked in the fame and attention that he had earned in his two epic contests with Cribb by remaining in London.

Perhaps in a bid to further irritate Richmond, whose relationship with Cribb had been mutually antagonistic for several years, Molineaux eagerly agreed to appear at a benefit the champion had arranged at the Fives Court on Thursday 30 January.

It was an event that would see the emergence of a formidable new pugilistic contender who many boxing experts remain convinced could have eventually become English Champion, had he not been killed at Waterloo in 1815.

Shaw was a splendid and sturdy specimen of English manhood. A near giant for the time, he stood over six foot tall, and weighed around 15 stone. Born in Nottinghamshire in 1789, he was said to have impressed the great Jem Belcher with his fighting ability and heart during a local set-to in his native county, prior to arriving in London after enlisting in the army in 1807 as a lifeguardsman.

With the likes of John Jackson showing eager interest in his pugilistic promise, an appearance at Cribb's benefit was a logical step in launching a potential prize-fighting career.

The contests at such benefits were not proper competitive contests, rather they were 'exhibitions'  and often utilised gloves (or 'mufflers') rather than bare knuckles. Nevertheless, despite their occasionally playful nature, many pugilists took such spars extremely seriously, especially ambitious newcomers who saw them as an opportunity to make a name for themselves and perhaps attract a patron from among the monied ranks of the Fancy.

This particular Thursday afternoon the Fives was packed to the rafters with around 1,500 eager spectators. The first spar saw Molineaux tangle with Jack Powers, a combustible young hot-head who both he and Richmond had mixed with with on previous occasions.

A couple of set-tos of 'inferior note' then took place before Molineaux took to the stage again, this time with Shaw in opposition. The Sporting Magazine recounted what happened next: 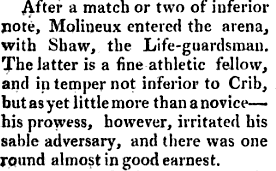 Shaw's impressive performance emboldened him greatly, and when Molineaux took to the stage after the exhibition, a fight between the two men was rapidly brokered: 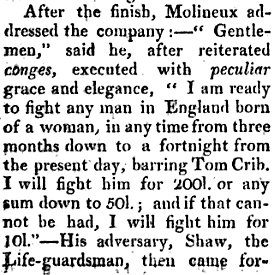 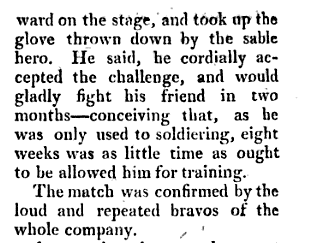 In the event, a formal contest between the two men never took place. Instead, Shaw made his prize-ring debut on 12 July 1812 at Coombe Warren against Burrows, a former Molineaux victim, soundly beating him in thirteen rounds and just seventeen minutes.

A second impressive victory for Shaw followed against Ned Painter in April 1815 at Hounslow Heath, after the great battle between Harry Harmer and Tom Shelton. Shaw-Painter proved a one-sided slaughter, with the lifeguardsman at one point dishing out "ten knock down blows successively" before Painter was led away in a "deplorable" state after twenty-eight minutes.

According to Pierce Egan, Shaw's performance proved he had "materially improved as a scientific pugilist", while the man himself was now confident that "no boxer existed who could conquer him". The Fancy were divided as to whether this was true or not, but many were salivating at the prospect of a potential Shaw versus Cribb title contest.

Fate, however, had different ideas.

After Napoleon had returned to power in France in March 1815, the Seventh Coalition formed and Shaw's lifeguards were eventually ordered to the continent as part of the effort to resist the resurgent 'Boney'. It was said that some members of the Fancy offered to purchase Shaw's discharge from the army in order to preserve his pugilistic ambitions, but he would not hear of it.

On the morning of 18 June 1815, Shaw was among the 118,000 strong force opposing Napoleon. In the wake of the Coalition's glorious and hard-earned victory, described by the Duke of Wellington as "the nearest-run thing you ever saw in your life", news soon filtered back to England of Shaw's death and heroism, although accounts of his role in the battle and the circumstances of his death varied greatly.

For example, on 1 July, the York Herald reported that Shaw's head had been "carried off by a cannon ball", while Saunders News-letter of 15 July reported that Shaw had killed five Frenchman before receiving a "mortal wound". The Lancaster Gazette of 22 July, meanwhile, recounted the following particulars concerning Shaw's role in the battle and his death: 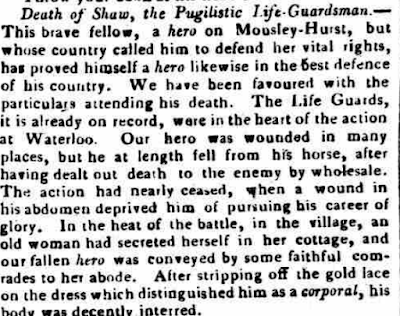 Henry Charles Moore, writing in the Dictionary of National Biography in 1901, described Shaw's role at Waterloo in greater detail. Although substantial debate exists concerning how accurate Moore's account is and what Shaw's exact movements were that day, common consent exists that he died a hero's death:

Corporal Shaw was sent out in command of a foraging party, but hurried back with his men in time to take part in the first charge. A cuirassier rode straight at Shaw, who calmly parried the thrust, and with one terrific stroke, the first blow he had dealt in real warfare, cut through the Frenchman's helmet and skull down to the chin. Shaw then rode at an eagle-bearer, killed him, and seized the eagle. He relinquished it, however, while cutting his way through the foes who immediately surrounded him. Although wounded, he took part in several other charges, exhibiting on each occasion his strength and marvellous dexterity with the sword. In the last charge but one made by the 2nd lifeguards, Shaw became separated from his comrades, and was quickly surrounded by the enemy. He fought desperately and killed nine of his opponents before his sword broke. Scorning surrender, he tore the helmet from his head, and, using it as a cestus, dealt some terrific blows before he fell to the ground, picked off by a cuirassier, who sat a little distance away, coolly firing his carbine.

After the battle was won Shaw struggled on in the track of his victorious countrymen, and at night a wounded lifeguardsman, lying on a dungheap, saw Shaw crawling towards him. 'Ah, my dear fellow, I'm done for!' Shaw whispered feebly, and lay down beside him. At daybreak he was found there dead.

Shaw was buried at La Haye Sainte, near to Waterloo and it was later said that his remains, or at least his skull, were transported to England, possibly on the promptings of Sir Walter Scott, the famous historical writer.

Today, Shaw's remarkable life and death are commemorated at the Household Cavalry Museum in London, where a plaster cast of his skull is still on display, as well in the form of a memorial obelisk in a churchyard in Cossall in his native Nottinghamshire, which also pays tribute to two other lifeguardsmen slain at Waterloo.

However it is John Haskins' 1816 poem The Battle of Waterloo: A Poem in Two Cantos which forms the most appropriate epitaph for Shaw, who was undoubtedly one of the most colourful and tragic figures from boxing and military history: