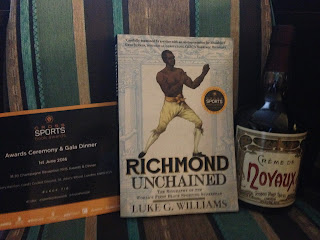 I've been meaning to blog for a few days now about the Cross British Sports Book Awards, which took place last week, on Wednesday 1 June.

Richmond Unchained was shortlisted for the Biography of the Year award, and although it didn't win, the whole process of being nominated and attending the awards was very special.

To gain recognition for one's efforts and hard work with an award nomination is very gratifying indeed, and the chance to rub shoulders with journalistic and sporting legends, from Nigel Mansell to Michael Lynagh, from Donald McRae to Brian Glanville was the experience of a lifetime.

Before heading to the awards, I made sure that I drank a toast to Bill Richmond by finally cracking open a bottle of his favourite drink - noyaux - which I had been saving for a special occasion. I then slipped into my tuxedo, complete with a pocket square utilising Bill Richmond's ring colours, and my wife and I walked the short distance from our hotel to Lord's cricket ground, where the awards were taking place in the Nursery pavilion.

While enjoying a champagne reception I, and many other nominees, were interviewed by the awards organisers. You can watch a video compilation of these interviews below, in which I even pop up for a few seconds.


We then took our seats for a splendid dinner. Before we knew it the ceremony had begun and the nominees for Biography of the Year had been announced, and a video of the judges discussing the merits of the shortlisted titles had been played. You can watch these videos below.

One of the judges, Annie Vernon, then took to the stage and announced that the winner was Andy Bull's Speed Kings. Disappointment then, for myself and Richmond Unchained, although I cannot stress enough that Mr Bull's book is an excellent work and a truly worthy winner. I was particularly pleased to see that the winning book was one with a historic dimension to it, and featured - in bob-sledding - a sport seldom written about. You can watch an interview with Andy Bull about his book below.

With the nerve-wracking part of the ceremony out of the way, we were able to sit back and enjoy the rest of the meal and the ceremony. And very enjoyable it was too!

All in all, then, a very memorable evening. Huge thanks to my publishers Amberley for supporting my nomination, and for the organisers and sponsors of the Sports Book Awards, particularly Danielle and Alastair at Agile Marketing.

Thanks also to my friends and family for their support and encouragement in supporting Richmond Unchained, as it grew from an idea, to a manuscript and then, finally, into an award-nominated book! Particularly heartfelt thanks to my wife Kemi, my mum and sister, my friend and Richmond Unchained illustrator Trevor Von Eeden and my friends Richard and Sara Evans.

You can check out more about the Cross Sports Book Awards on their website here and on their video channel here.
Posted by Luke G. Williams at 01:31