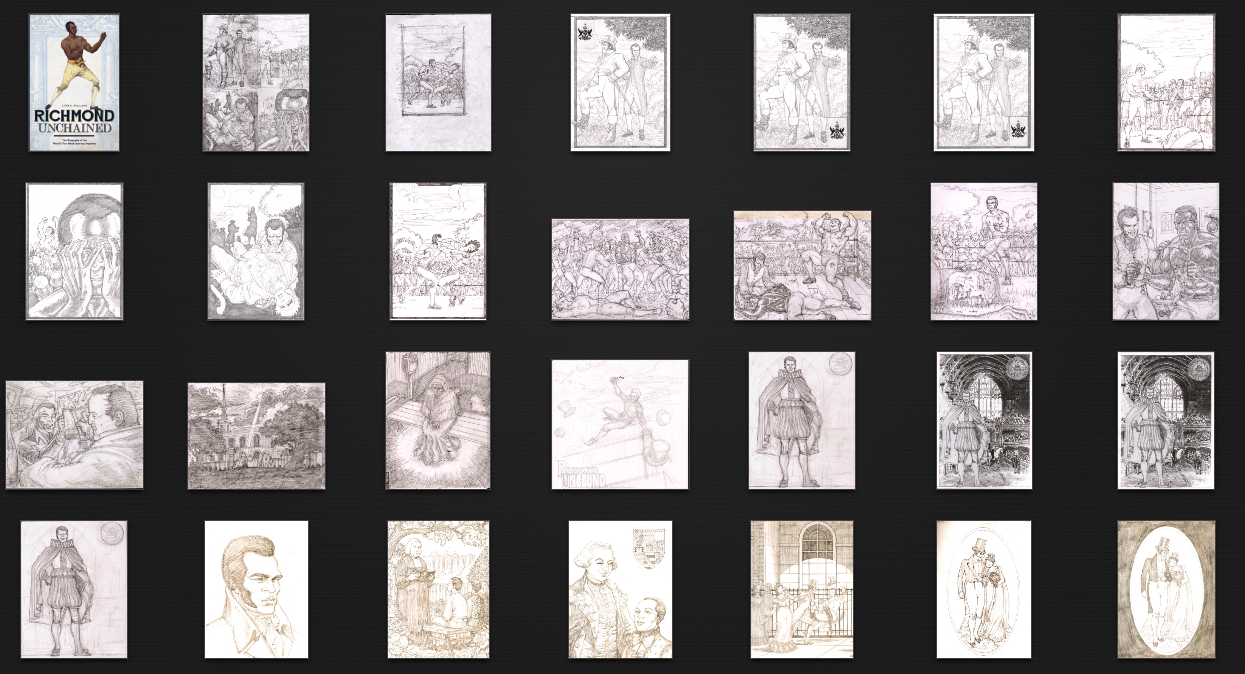 As Richmond Unchained nears completion, here is a glimpse of some of the preliminary and original artwork by Trevor Von Eeden which, once complete and inked, will grace the book. (Click on the image to see a larger version! The only illustration not by Trevor is the cover design in the top left-hand corner, which uses Dighton's original etching of Bill Richmond)

Trevor is a renowned artist who has worked for Marvel and DC Comics among other outlets, as well as being the writer-artist behind the brilliant graphic novel The Original Johnson. He has produced some truly amazing work for Richmond Unchained, recreating many crucial scenes and characters from Bill Richmond's life, which I can't wait to see in print.

The final versions of these illustrations will appear in the book when it is published in August. A selection of original prints of Bill and his contemporaries, the majority sourced from my own private collection, will also feature in the book. Until then I thought you'd enjoy this sneak peek of what Trevor has been working on.

Oh yes, and here's a reminder of what this project is all about!

Today the name of the bare-knuckle boxer Bill Richmond is largely unknown to the wider public, but he is one of the most significant sportsmen in history and was one of the most celebrated celebrities of the Georgian era. The fact no biography has ever been devoted to Richmond is startling, for the story of his life and career is a compelling and thrilling tale, played out against the backdrop of a series of significant historical events.

As one of the first black men to survive and thrive in white-dominated English society, Richmond is long overdue recognition as one of the key figures in sporting as well as social history. Born into slavery in Staten Island, New York during colonial rule, Richmond escaped from a life of servitude by winning his freedom as a young boy and carved a new life for himself in England as a cabinet-maker and then a renowned and widely respected prize-fighter and trainer.

From his humble origins, Richmond, through force of will and personality, fought his way to the top table of British society, ultimately fulfilling an official role at the coronation celebrations of King George IV in 1821. Richmond’s amazing life encompassed encounters and relationships with some of the most prominent men of the age, including the progressive Earl Percy, the writer William Hazlitt, the dissolute Prince Regent and the wild and untameable Lord Camelford.

The story of Bill Richmond is not only an incredible tale of personal advancement and triumph, but also the story of a life which was shaped, informed and influenced by a series of turbulent historical events – including the American War of Independence, the fight for black emancipation and Britain’s long-running conflict with the Emperor of France, Napoleon Bonaparte.

Luke G. Williams’ biography, the first full-length account of Richmond's life, utilises over a decade of research on both sides of the Atlantic, revealing details, sources and new facts about Richmond’s life that have never before been published. In separating myth from fact and legend from reality, for the first time, the full story of Bill Richmond’s life and times is brought gloriously to life.

Richmond Unchained will feature illustrated material from the Georgian period, as well as new and exclusive illustrations by acclaimed American artist Trevor Von Eeden.
Posted by Luke G. Williams at 10:43