The art of Richmond Unchained - part 1 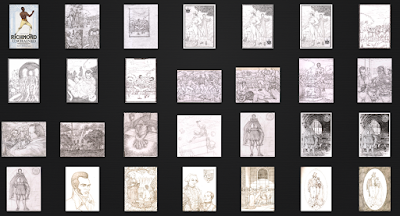 Since the publication of Richmond Unchained I have received numerous enquiries and compliments about the book's artwork. In order to satisfy readers' curiosity I will be writing a series of articles describing the thinking behind the artwork and the process of working with the brilliant artist Trevor Von Eeden to produce it ...

From the moment I signed a contract with Amberley to publish Richmond Unchained, one of the most important, but challenging, aspects of the book I had to consider was the artwork.

The accepted convention with historical biographies is to illustrate them with a 'picture section' in the middle of the book (is there a technical name for such a section? If so, I don't know what it is!) I wanted such a section within Richmond Unchained, in order to feature the many prints and illustrations of Bill that have been produced over the years, however, this idea alone didn't satisfy me.

You see, I love the style of illustrated fiction which was so prevalent during the Georgian and Victorian eras. To me there is something inherently romantic, inventive and wonderful about Cruikshank's illustrations for Pierce Egan's Life in London, or Robert Seymour's plates in The Pickwick Papers, or Sidney Paget's Sherlock Holmes illustrations in The Strand magazine ...

All of which got me thinking about whether such a style of 'letterpress plus illustrations' could work in a modern biography ...

It was a question I thought long and hard about. Eventually, I hit upon the idea of utilising the illustrated fiction convention within Richmond Unchained, but decided to use a more modern form of illustrations, namely comic- book / graphic-novel style illustrations. Thus, I hoped, the book would blend old-world charm with a more modern sensibility.

From the start, I also had the perfect artist in mind for these illustrations - the brilliant Trevor Von Eeden, whose work for DC and Marvel Comics, among others, I have always admired. Trevor also has proven form as a boxing illustrator, having created the wonderful two-part graphic novel The Original Johnson about the life of heavyweight legend Jack Johnson. This work had led me to commission him to produce illustrations for Boxiana: Volume 1, an anthology of boxing writing I published last year. (As an aside, in my dealings with Trevor - all conducted via email - I'd found him to be one of the most fascinating, reliable and trustworthy people I'd ever met, as well as one of the most talented!)

Initially my publishers were pretty ambivalent about my idea. My contract specified that Richmond Unchained would contain a certain number of illustrations, and as far as the publishers were concerned these would be in the middle of the book. When I raised the idea of further illustrations to accompany each chapter they were non-committal, pointing out that any 'extra' illustrations could possibly be accommodated, but only if my text was shortened, so that the book's overall page count was not compromised.

At this stage I was all too aware that I was probably going to overshoot my contracted word count by about 10,000-15,000 words, and the sane decision would have been to drop the idea of illustrations altogether. However, I couldn't shake the idea from my head. Therefore I decided to steam ahead and commission illustrations from Trevor myself. Once my publishers saw Trevor's work I was convinced that they would come around to my idea and expand my page count. If not, then I would at least have a collection of original Bill Richmond illustrations all of my own!

With the deadline for submitting the manuscript of Richmond Unchained fast approaching, I soon realised that there was not enough time to commission illustrations for every single chapter. As a compromise, I decided to aim for 18 illustrations, and sketched out a 'brief' for Trevor detailing my basic ideas for each image ...