Bill Richmond bookshelf: 'A sort of magic' - Writing the prizefight by David Snowdon 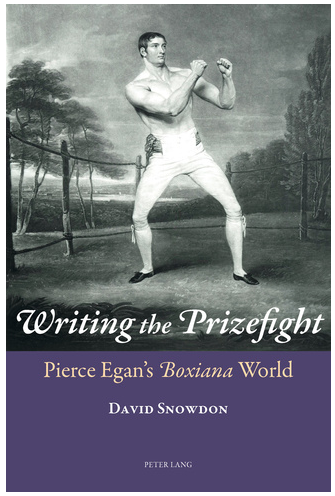 Over the next few months I’ll be taking the time to review some of the books, articles and research facilities which I have found useful during the decade-long process of researching and writing Richmond Unchained. So far in the series I have looked at Peter Fryer's Staying Power, Pierce Egan’s Boxiana, the biographies of Tom Cribb and Tom Spring penned by Jon Hurley and Tom Reiss' The Black Count. Today I examine David Snowdon's award-winning Writing the Prizefight: Pierce Egan's Boxiana World.

Pierce Egan is one of the most fascinating and influential figures in the history of sporting discourse. Despite his (over?) use of the idiomatic Regency lingo known as 'Flash', which renders some passages within his work nearly incomprehensible to modern readers, his breezy enthusiasm and vivid world-play and imagery remain a joy to read.

During the 1810s and 1820s, the wonderfully idiosyncratic Egan was as famous as many of the prize fighters whose exploits he recounted. Yet he has rarely received the critical attention or analysis that he deserves, either within popular or academic circles.

John Cowie Reid's 1971 book Bucks and Bruisers: Pierce Egan and Regency England was the only book I knew of from modern times devoted to Egan and his oeuvre ... until, that is, the 2013 publication of Snowdon's impeccably researched and absolutely fascinating Writing the Prizefight: Pierce Egan's Boxiana World.

Given the existence of Reid's work, which deals very efficiently indeed with the biographical paraphernalia of Egan's life and times, Snowdon wisely eschews the temptation to merely produce another biography.

Instead he attempts something far more ambitious: namely a literary, historical and socio-cultural analysis of Egan's literary style, identifying its influence on his contemporaries, as well as among writers who succeeded him, such as Charles Dickens and George Bernard Shaw. Snowdon's account of the rivalry between Egan and John Bee - who at one point 'took over' the Boxiana brand - deserves particular attention for its comprehensive nature and insightful treatment.

Snowdon's summation and analysis of Egan's unique talents is masterfully articulated. "It might be said," he writes at one point, "that Egan weaves 'a sort of magic' in his transformation of sporting scenes. It is the skilful unorthodoxy practised by similarly inventive chroniclers that particularly befits the sports-writing genre, and renders it distinguishable by their untrammelled ability to blend multifarious techniques. In terms of their linguistic inventiveness and spirit, they are effectively poets."

As well as examining Egan's significance and style, Snowdon also examines the fascinating role of what he terms 'pugilistic reporting' in the development during the early 19th century of notions of morality, 'military readiness' and British national identity.

Many scribes within boxing writing circles inevitably sneer at those writers who adopt an academic approach - an inverse snobbery aptly summed up by the fact that there still exists an award for 'excellence in boxing journalism' which is named after Nat Fleischer, one of the shoddiest boxing historians of all time - but Snowdon's work is a glorious vindication of the importance of academic rigour, research and methodology.

Writing the Prizefight illuminates our understanding of Egan, the world in which he operated and the way in which he orchestrated language to dazzling effect. Yet it is no hagiography. Lofty claims have been made in the past concerning the extent of Egan's influence on, for example, Dickens, and the sphere of sports journalism as a whole, yet Snowdon's precise analysis avoids shoddy generalisations or hyperbole. His judgements are sober and restrained - and all the more impressive for it.

The depth of Snowdon's research, coupled with his obvious passion for the subject matter at hand, is inspiring and provides an intimidating yard-stick by which all future studies of Egan will be measured. Writing the Prizefight is not only an illuminating, fiercely intelligent read, but also a clear labour of love - from the precise research, to the well-chosen illustrations, to the superlative glossary of 'Flash' terms -  every page has been lavished with an admirable attention to detail and the determination to achieve excellence.

It is no wonder that Writing the Prizefight deservedly won the 2014 Lord Aberdare Literary Prize for Sports History, awarded by the British Society of Sports History, for it is a book which should be considered compulsory reading not only for anyone with an interest in Egan and boxing, but also for literary historians and anyone with an interest in the cultural context of Georgian times.

When awarding the Aberdare prize, the panel noted admiringly that Snowdon's work has "opened up an area of sport history that had been neglected", an appropriate summary of its groundbreaking status within sporting history circles.

Like Egan before him, Snowdon possesses 'a sort of magic' and his book has pride of place on my Bill Richmond bookshelf. If it isn't there already, it should be on your bookshelf too.
Luke G. Williams at 12:18
Share